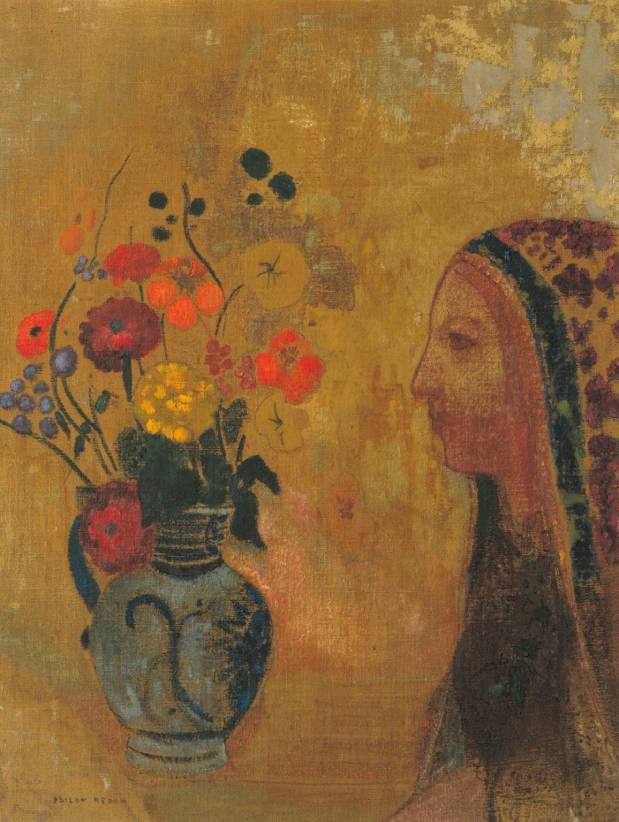 This medium-size oil painting by the French artist Odilon Redon depicts a vase of flowers on the left side of the composition and a woman’s head and shoulders shown in profile on the right, facing the vase. The woman wears a patterned headscarf, and the back of her head and the lower part of her body are cropped out of the scene at the edges of the canvas. The vase and the woman are shown quite close up and therefore seem to occupy the foreground of the scene, but the pictorial space in this painting remains ambiguous due to the fact that it has no discernible setting – only a flat, mottled yellow-ochre background. Although the artist has used strong tones of red, blue, orange, purple and dark green paint to depict the woman and the vase of flowers, the ochre background shows through this paint in several areas, which has the effect of placing all of the elements of the scene onto a single flat plane. Redon’s name is inscribed onto the painting at the bottom left corner of the painting.

The work was made when the artist was living and working in Paris, and although the exact date for the painting is unknown, it is thought to have been produced between 1895 and 1905. To make the work, the artist applied oil paint directly onto to an unprimed linen canvas. Redon did not varnish the painting when it was complete, and as a result the ochre background colour that dominates the painting has faded over time. The original background would have been brighter and would perhaps have communicated a livelier tone. Although descriptive, the painting’s title does not indicate the woman’s identity, whether the artist knew her or if she was in fact fictional, nor is there a clear indication of her relationship to the vase of flowers.

Profile of a Woman with a Vase of Flowers was made at a time of change in Redon’s practice. From 1890 onwards the artist had moved from producing predominantly monochromatic prints, drawings and paintings towards the introduction of colour into his work. Furthermore, new motifs such as flowers began to appear regularly in his paintings. Profile of a Woman with a Vase of Flowers is one of a number of works Redon produced around the turn of the twentieth century that feature flowers and a female head, such as his pastels Sita 1895 (Art Institute of Chicago, Chicago, Illinois) and Portrait of Violette Heymann of 1910 (Cleveland Museum of Art, Cleveland, Ohio).

Although the scene in Profile of a Woman with a Vase of Flowers remains ambiguous, there are clear formal resonances between the woman and the vase: for instance, the shape created by the flower heads and petals is reflected in the floral pattern on the fabric of the woman’s scarf, and the smooth, rounded contours of her profile are echoed by the curved sides of the vase. In this sense, there is a decorative appearance to the painting that may reflect the fact that around this time Redon had begun to take up commissions for the painting of murals and screens. For instance, the series of murals he completed in 1910–11 for the library at Fontfroide Abbey near Narbonne in southern France features veiled women and natural forms such as flowers, trees and butterflies presented against gold-yellow backgrounds in a similar manner to Profile of a Woman with a Vase of Flowers.