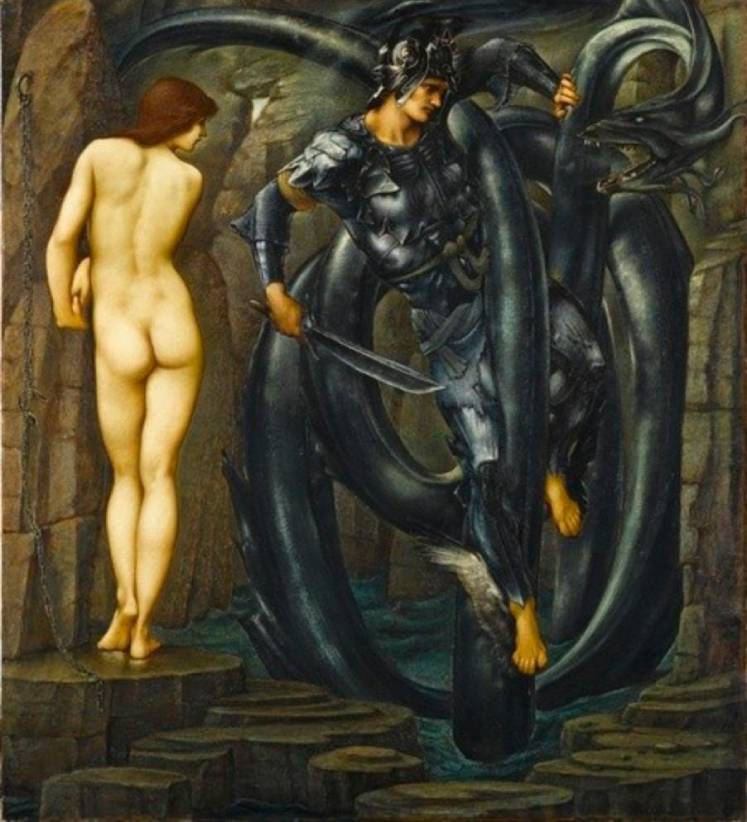 This picture, like other members of the series, draws upon the version of the Perseus legend that appears in William Morris’s “The Doom of King Acrisius” from The Earthly Paradise. See the relevant passage below:

He beheld the sea,
And saw a huge wave rising mightily
Above the smaller breakers of the shore,
Which in its green breast for a minute bore
A nameless horror, that it cast aland
And left, a huge mass on the oozing sand,
That scarcely seemed a living thing to be,
Until at last those twain it seemed to see,
And gathering up its strange limbs, towards them passed.
And therewithal a dismal trumpet-blast
Rang from the tower, and from the distant town
The wind in answer brought loud wails adown.
Then Perseus gently put the maid from him,
Who sank down shivering in her every limb,
Silent despite herself for fear and woe,
As down the beach he ran to meet the foe.
But he, beholding Jove’s son drawing near,
A great black fold against him did uprear,
Maned with grey tufts of hair, as some old tree
Hung round with moss, in lands where vapours be;
From his bare skull his red eyes glowed like flame
And from his open mouth a sound there came,
Strident and hideous, that still louder grew
As that rare sight of one in arms he knew:
But godlike, fearless, burning with desire,
The adamant jaws and lidless eyes of fire
Did Perseus mock, and lightly leapt aside
As forward did the torture-chamber glide
Of his huge head, and ere the beast could turn,
One moment bright did blue-edged Herpe burn,
The next was quenched in the black flow of blood;
Then in confused folds the hero stood,
His bright face shadowed by the jaws of death,
His hair blown backward by the poisonous breath;
But all that passed, like lightning-lighted street
In the dark night, as the blue blade did meet
The wrinkled neck, and with no faltering stroke,
Like a God’s hand the fell enchantment broke,
And then again in place of crash and roar,
He heard the shallow breakers on the shore,
And o’er his head the sea-gull’s plaintive cry,
Careless as Gods for who might live or die. — “The Doom of King Acrisius,” I, 274-75] (The Victorian Web)