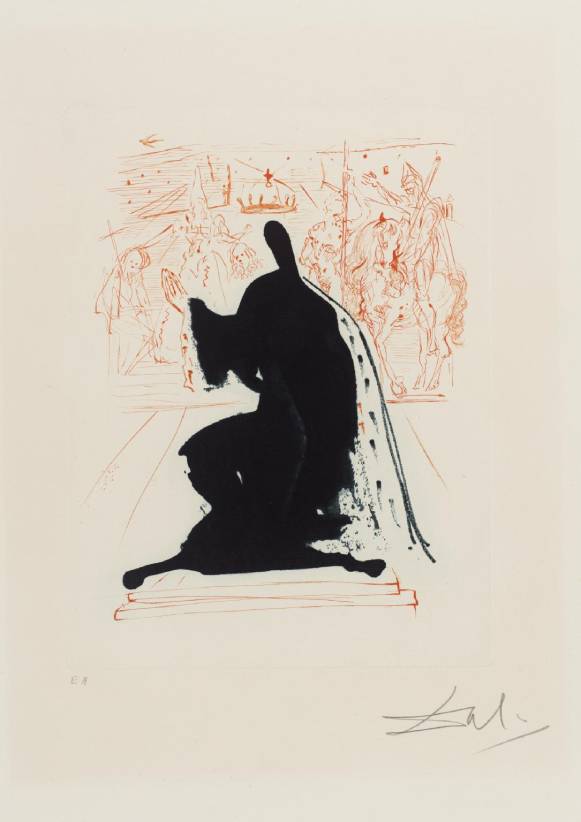 Albert Field, The Official Catalog of the Graphic Works of Salvador Dalí, New York 1996, p.80: “King of Aragon is similar to other graphic work executed by Dalí in the 1970s, notably his illustrations for his 1932 film scenario, Babaouo, published as a graphic suite in 1978, which similarly modelled an image from an abstract splodge of ink set against a loosely drawn background. Here, the ink stain becomes the King’s royal robes trimmed in ermine; he extends his right arm in a benevolent gesture, while a parade of horsemen and holy figures fills the background. The King is capped by a floating crown – an emblem the artist used frequently in his work and especially in his own signature; for Dalí, this crown signified both monarchy and morphology, as its shape was derived from a well-known stroboscopic photograph of a drop of milk splashing into a bowl. The general effect is quite theatrical; indeed, the background might just as easily be a backdrop, presenting the King centre stage, perched atop a short pedestal. As there were sixteen monarchs of the House of Aragon and potentially many more, depending on how one considers the ruling house in relation to the Crown, the identity of Dalí’s subject is not conclusive. He may be referring to James I of Aragon, known as ‘the Conqueror’ (1208–1276), who became ruler over the counties of the Principality of Catalonia in 1258, when the king of France relinquished his feudal lordship over the region. Under James I, Catalonia became an important catalyst for expansion of the empire. Further, when James I erected the Kingdom of Majorca in 1276, he made Perpignan its capital; Dalí was known to have tremendous affection for the city of Perpignan – particularly its train station, which he declared in 1964 to be the ‘centre of the universe’. Alternatively, given his later religious fervour and the figures to the rear the King, Dalí’s etching may be an homage to another King of Aragon, Ferdinand II, ‘The Catholic’ (1452–1516). When Ferdinand succeeded his father as King of Aragon in 1479, the territories of the Crown of Aragon were united with the Crown of Castille, thus forging a single political unit initiating modern Spain. Under King Ferdinand and Queen Isabella, Spain became a Catholic monarchy – a historical subject that greatly interested Dalí, evidenced by his 1958–9 painting The Discovery of America by Christopher Columbus (The Salvador Dalí Museum, Saint Petersburg, Florida) which recalled that it was under Ferdinand and Isabella’s patronage that Columbus (whom Dalí believed was Catalan) set sail in 1492.” (Tate)