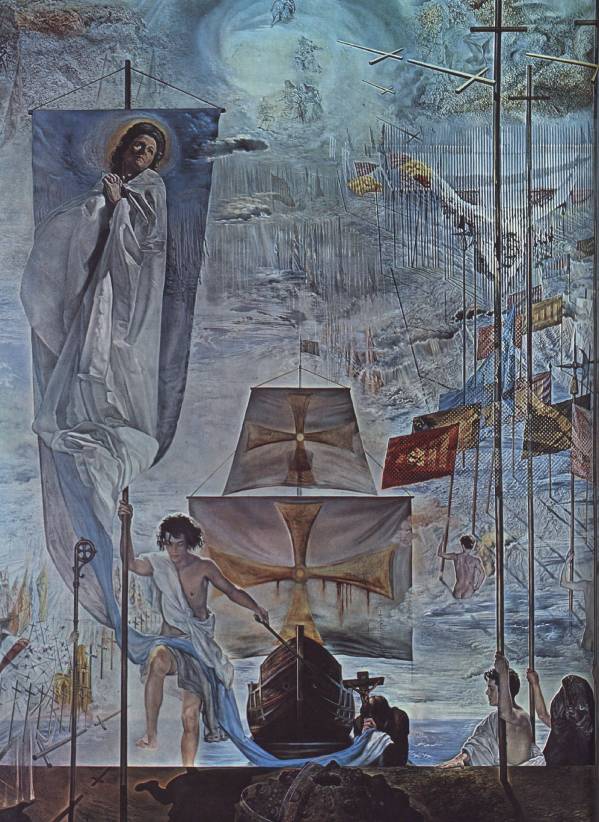 This work is an ambitious homage to Dalí’s Spain. It combines Spanish history, religion, art and myth into a unified whole. It was commissioned for Huntington Hartford’s Gallery of Modern Art on Columbus Circle in New York. At thetime, some Catalan historians were claiming that Columbus was actually from Catalonia, not Italy, making the discovery all the more relevant for Dalí, who was also from this region of Spain. Can you find the sea urchin in the middle foreground of the painting? In his book, Diccionario privado de Salvador Dalí, Dalí writes, “The sea urchin, based on the dodecahedron, is the perfect animal. It is the image of heaven.” You may wonder ‘What does a sea urchin have to do with Christopher Columbus?’. This particular type is called a “sputnik” sea urchin. And the Russian satellite of the same name, launched shortly before this work was completed. That, together with the encircling cosmic rings in the painting, hint that the sea urchin represents the age of space travel. What better connection to make in a painting celebrating the age of exploration? In fact, if you look at Columbus, he looks as though he’s just about to step upon the moon. (DMSP)