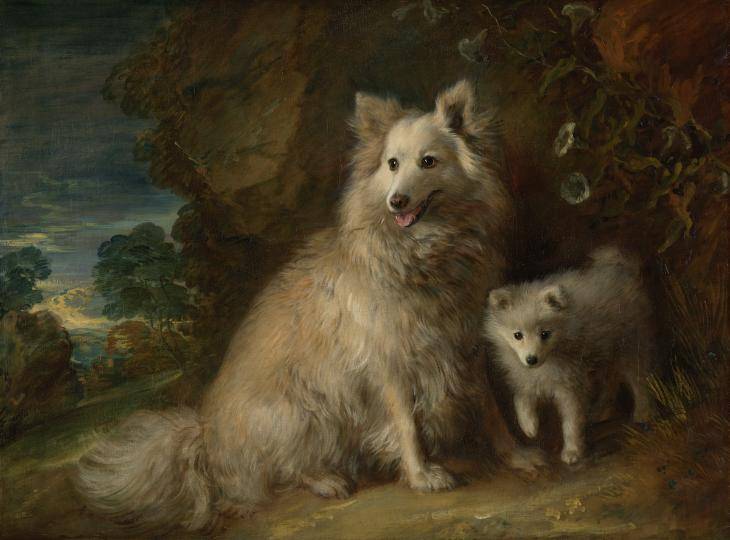 The two dogs in this painting belonged to the musician Carl Friedrich Abel, the last of the great viola da gamba virtuosi. Abel was one of a trio of German composers and musicians, with Johann Fischer and Johann Christian Bach, who dominated the music scene in England in the mid-eighteenth century. He and Gainsborough probably first met in Bath in the early 1760s, and became close friends. Gainsborough, himself an accomplished musician, bought one of Abel’s most prized instruments and the two often played together. The artist probably presented this painting to Abel in exchange for lessons on the instrument.

This picture is presumed to have been made at the same time that Gainsborough painted Abel’s portrait, which shows Abel with a similar dog (1777, Huntington Art Gallery, San Marino, California). It is reported by Gainsborough‘s biographer that, when the portrait of the musician’s dogs first arrived at Abel’s house, ‘the deception was so complete that the elder subject, irritated at the presence of a supposed rival, flew at her own resemblance with such fury that it was found necessary to place the picture in a situation where it was free from her jealous anger’ (Whitley 1915, p.363).

The depth of friendship between Gainsborough and Abel can be seen in a letter the artist wrote to Henry Bate on 20 June 1787, upon Abel’s death:

Poor Abel died at about one o’clock today … We love a genius for what he leaves and we mourn him for what he takes away … For my part I shall never cease looking up to heaven – the little while I have to stay behind – in hopes of getting one more glance of the man I loved from the moment I heard him touch the string … My heart is too full to say more.
(in M. Woodall, ed., The Letters of Thomas Gainsborough, revised edition, London 1963, p.31, no.4)

There are records of Pomeranian-type dogs in England in the sixteenth century, although they were still virtually unknown there when Gainsborough painted this picture. At that time they were known as Fox dogs, because of their facial similarity to foxes, and it is under the title Fox Dogs that this picture was first exhibited (British Institution, 1814). The breed, of Spitz origin, was closely related to the white Samoyed, and was much larger than the toy variety which is seen today. Fox dogs can also be seen in Gainsborough’s paintings The Morning Walk (1785, National Gallery) and Perdita (Mrs Robinson) (1781-2, Wallace Collection). As the breed was not popular in Britain until the late nineteenth century, it is possible that Abel may have brought a dog from Germany which Gainsborough used as a model in his paintings.

The popularity of animal painting increased in Britain towards the end of the eighteenth century, with an emphasis on the animal’s individual character. Gainsborough excelled at painting dogs and, in addition to including dogs in portraits, he had the ability to make dogs a subject for serious portraiture in their own right. A portrait of the artist’s own dogs, Tristram and Fox (c.1775–85), is also in the Tate collection (Tate Gallery N01483). (Tate)