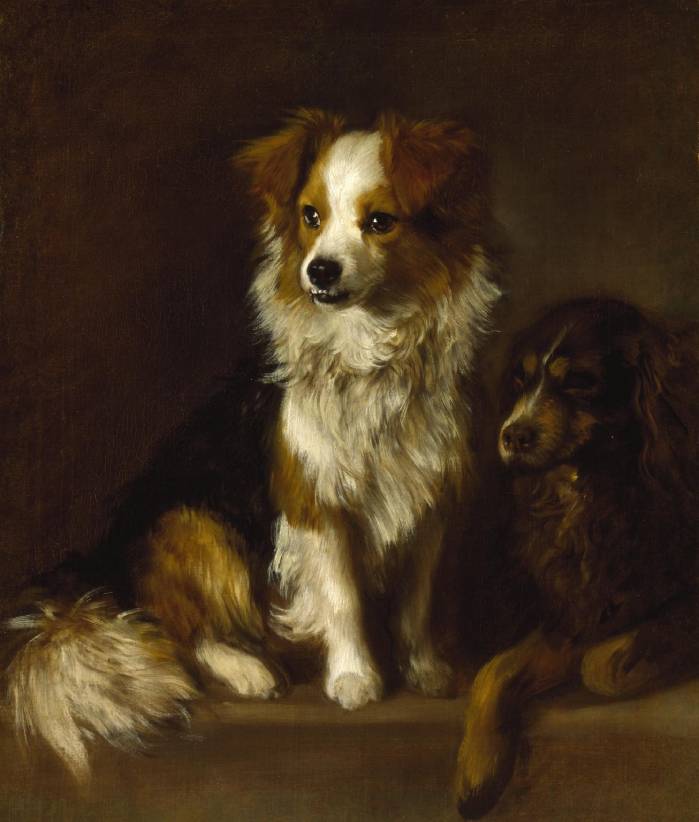 Gainsborough had a countryman’s love of dogs and included them in numerous portraits and landscape paintings. He also painted a few works where dogs were the central subjects. These include one of his earliest known works, Bumper (1745; private collection), Pomeranian Dogs (1777; Tate N05844) and this portrait of Tristram and Fox. While most individual canine portraits were produced for their owners, this is apparently a personal one, for Tristram and Fox were the artist’s own pets.

The identification of the animals in this oil portrait as Tristram and Fox, however, is not conclusive, for the subject was not titled by the artist. Nor was it engraved. It may have been the received opinion of the artist’s descendants who gave the painting to the National Gallery in 1896, and has been accepted as such ever since. A chalk sketch by Gainsborough of two dogs, probably dating from the 1780s (sold Christie’s June 13 2001, lot 5), was later reproduced as a lithograph by R. J. Lane in 1827, with the printed inscription, ‘Tristram and Fox. Favorites [sic] of Gainsborough’. However, the two dogs in the sketch are quite different from those in the painting, indicating that either the drawing or the painting has been wrongly identified at some point.

The choice of his dogs’ names is indicative of Gainsborough’s sense of humour and his awareness of contemporary literary and intellectual culture. Tristram is thought to have been named after the eponymous hero of Laurence Sterne’s novel The Life and Opinions of Tristram Shandy, Gentleman, (1759–67). The centrally placed dog was probably called Fox simply because of its vulpine appearance, although it may also have been a humorous allusion to Charles James Fox (1749–1806), the Whig politician.

Gainsborough’s affectionate portrayal of the two dogs is in keeping with the cult of sensibility (of which Sterne’s novel was a key text) that advocated kindness to animals and an understanding of their various natures. Both handling and the viewpoint here encourage us to see the dogs as sentient beings in their own right, a perception enhanced by the catch-lights in Fox’s eyes along with his part-opened mouth. They are clearly shown as family companions rather than working or sporting animals.

The two dogs meant a great deal to Gainsborough and his wife. According to the artist’s early biographer, G.W. Fulcher, Gainsborough sometimes characterised himself as Fox in correspondence with his wife: ‘Whenever [Gainsborough] spoke crossly to his wife …he would write a note of repentance, sign it with the name of his favourite dog, ‘Fox’, and address it to his Margaret’s pet spaniel, ‘Tristram’. Fox would take the note in his mouth and duly deliver it…’ (Fulcher, pp.152-3).

It is difficult to identify which breeds Tristram and Fox belong to, partly because present-day breeds may look markedly different today from their appearance in the eighteenth century. The dogs are clearly of two different breeds: Fox, on the left, with its pointed, folded-down ears, feathered coat and white frilled collar, appears to be a collie-like breed, perhaps a Shetland Sheepdog, while Tristram, on the right, with its floppy silken ears, is similar to a spaniel, some varieties of which are black and tan in colouring. It appears to be a small dog although, as it is lying down (while Fox is sitting upright), the scale could be misleading. It may perhaps be a larger dog, such as a setter: the Gordon setter has the characteristic brown circular markings on the eye brows.

The painting probably dates from Gainsborough’s early London period, and is recorded by Sir Ellis Waterhouse as having hung over the chimney piece in Gainsborough’s London house. It may originally have had a more horizontal format, for the unfinished figure of Tristram on the right appears to have been cut down. (Tate)