This canvas forms the pair to a painting in the Toledo Museum of Art entitled Blind Man’s Buff (Le Colin-Maillard). Both were in the collection of Baron Saint-Julien in Paris in whose posthumous sale they were sold in 1784 for 500 livres. It would seem that the two canvases were acquired by the dealer Le Brun and that they appeared again on the art market two years later at the posthumous sale of another collector, Morel, where the dealer Joubert bought them for 852 livres. They then entered the collection of Count Sinéty. At a later date the two canvases belonged to Baron Nathaniel de Rothschild in Vienna and then to Baron Maurice de Rothschild in Pregny. The pair was subsequently split up when on the US art market. The See-saw was acquired in 1956 by Baron Hans Heinrich Thyssen-Bornemisza for the Villa Favorita, while Blind Man’s Buff was acquired by Edward Drummond who donated it to the Toledo Museum of Art in 1954. The See-saw has appeared in the Collection’s catalogues since the edition of 1958 by Rudolf Heinemann.

The two canvases that were sold in the auction of the Saint-Julien collection were larger than the canvases in their present state, whose dimensions are roughly comparable to the descriptions of the paintings as they were offered in the Morel sale. This fact led Georges Wildenstein to suggest that there were two different pairs with the same subjects, an idea largely rejected in the present day. The difference in sizes has been explained by an error in the Saint-Julien sale catalogue or, alternatively, it has been suggested that they were cut down at the upper edge at some point between 1784 and 1786. This would have reduced what were two decorative paintings to the format of easel paintings, as Sutton suggested. While still retaining their vertical format, the pair was engraved by Jacques-Firmin Beauvarlet. His prints show the compositions with more branches, leaves, trunks and foliage as well as a larger area of sky.

The See-saw has been dated to an early period in Fragonard’s career before his first trip to Italy. During that time he was a pupil in Boucher’s studio while in 1752 he entered the Prix de Rome. Between 1753 and 1756 the artist spent three years at the famous École royale des Elèves protégés headed by Van Loo. He left the school for Rome where he remained between 1756 and 1761. At that point the artist’s style notably modified and became considerably more decorative. Despite Fragonard’s youth, the present oil features elements that would later bring him fame and popularity such as his subject matter — in this case children playing in a wood — and the manner of depicting it. Fragonard sets the four figures in a grove whose leaves and branches spread across the canvas. His love for and interest in nature, which the artist always captured in a particularly lively manner, completely filling his compositions with natural elements, would manifest itself slightly later in his Italian drawings. In The See-saw the movements and gestures as well as the colour and manner of applying it create an image filled with life in which the young girl swinging forwards in the air offers a marvellous study of dynamism through the use of diagonal lines. The brushstroke is fluid and the colours are typically luminous. The canvas has been seen as an important precedent for one of Fragonard’s most celebrated works, The Swing in the Wallace Collection in London, which also belonged to the Baron Saint-Julien and which dates from the late 1760s. 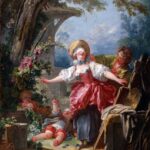