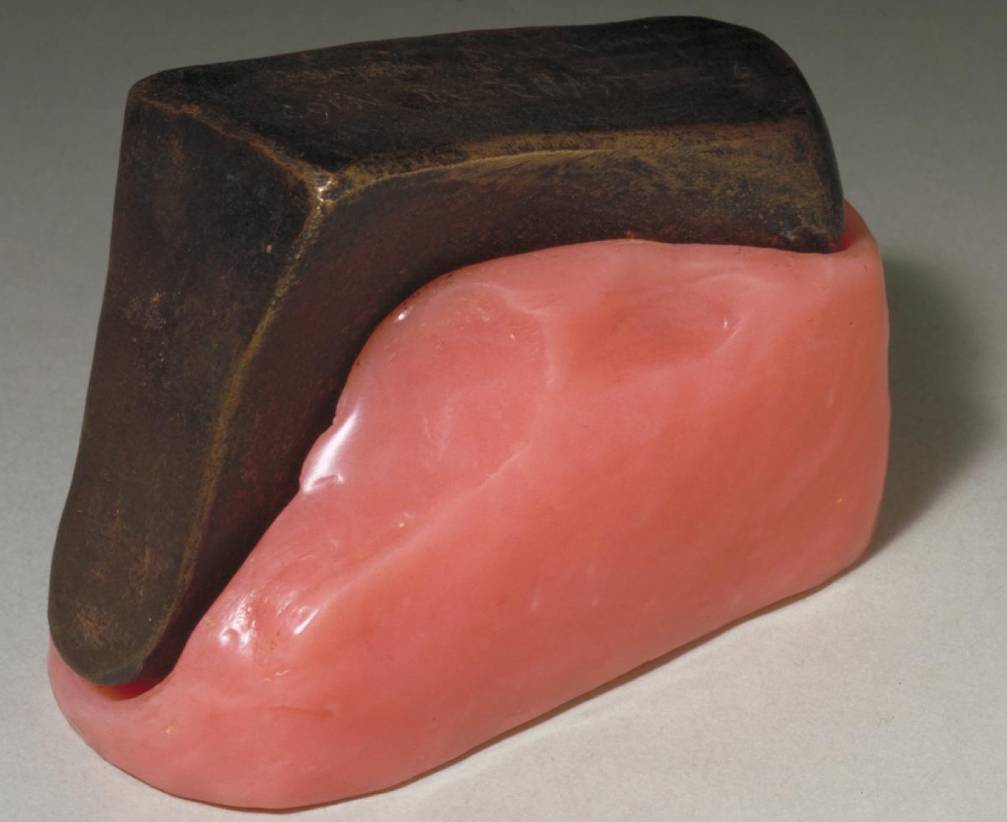 In the 1950s Duchamp created a series of four small-scale ‘erotic objects’: Not a Shoe (1950, Jedermann Collection), Female Fig Leaf (1961 bronze cast, Tate Gallery T07279), Dart Object (1962 bronze cast, Tate Gallery T07280), and Wedge of Chastity (1963 bronze and dental plastic edition, Tate Gallery T07281). Not a Shoe is thought to be an early version of the wedge section in Wedge of Chastity. After Duchamp‘s death, these pieces were found to be connected with Etant donnés, or Given, the piece on which Duchamp worked in secret between 1946 and 1966 and which is now installed at the Philadelphia Museum of Art. Etant donnés can be seen as a three-dimensional realisation of the action alluded to in The Bride Stripped Bare by her Bachelors, Even (replica in Tate Gallery, T02011). Etant donnés consists of an elaborate erotic tableau of a female nude with legs spread, and is viewed through a peep-hole in a wooden door. Wedge of Chastity has been seen as the logical culmination of the other erotic pieces, consisting as it does of a wedge which fills a slit-like opening in the second element which, made of dental plastic, resembles the colour and texture of flesh. The plaster and dental plastic original was made in 1954 when, at the age of sixty-seven, Duchamp took as his second wife Alexina ‘Teeny’ Matisse. The artist explained, ‘It was my wedding present to her. We still have it on our table. We usually take it with us, like a wedding ring, no?’ (Pierre Cabanne, Dialogues with Marcel Duchamp, New York, 1971, p.88). Duchamp‘s technical assistant on the sculpture was a dental mechanic, Sacha Maruchess. The union of the two forms expresses a coupling of male and female, or positive and negative shapes. An unauthorised bronze edition of seven was made from a crude 1954 plaster maquette. Duchamp asked that the edition be destroyed. Two examples were retained however, one of which is in the collection of the Museum of Modern Art, New York. The Tate‘s example is number six in an edition of eight in bronze and dental plastic, produced by the Galleria Schwarz, Milan in 1963. Two further examples were reserved for the artist and Arturo Schwarz. (Tate)