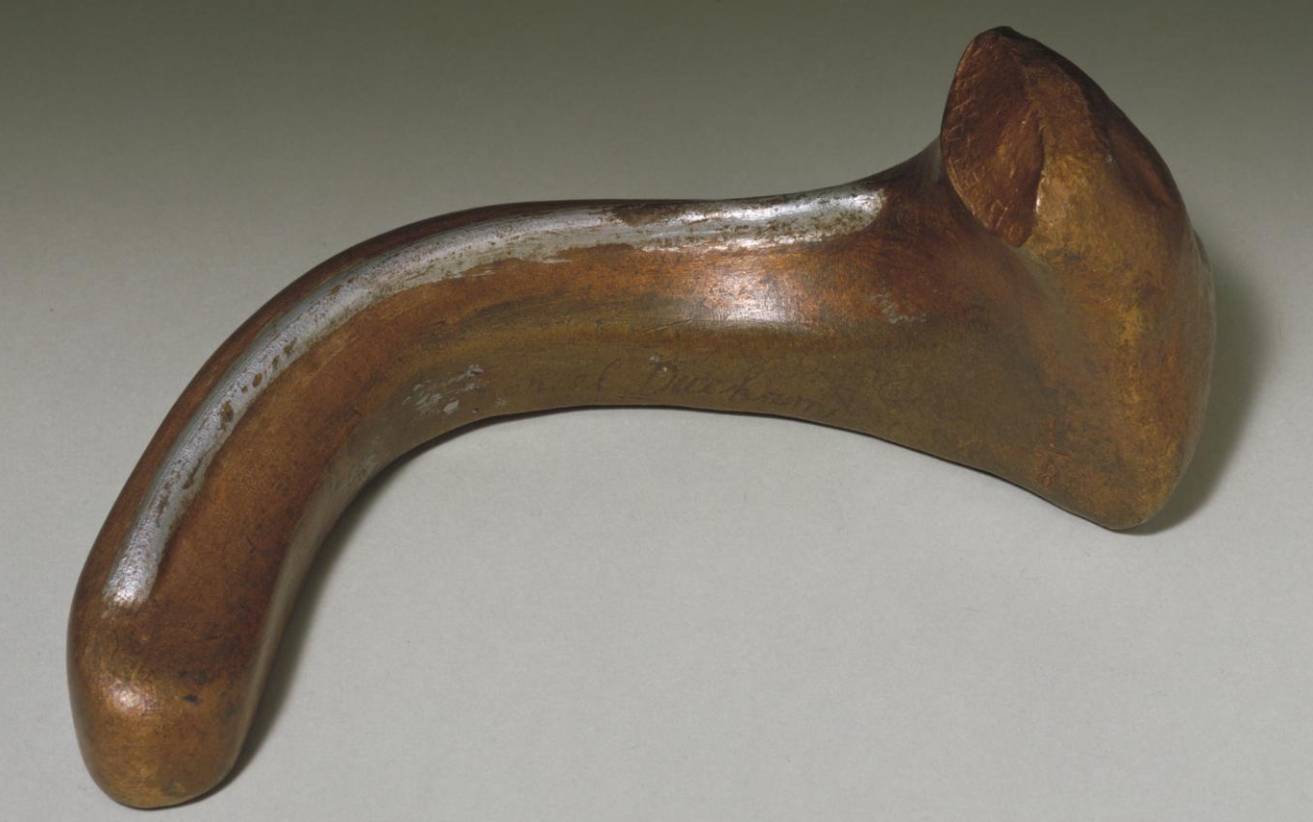 In the 1950s Duchamp created a series of four small-scale ‘erotic objects’: Not a Shoe (1950, Jedermann Collection), Female Fig Leaf (1961 bronze cast, Tate Gallery T07279), Dart Object (1962 bronze cast, Tate Gallery T07280), and Wedge of Chastity (1963 bronze and dental plastic edition, Tate Gallery T07281). Not a Shoe is thought to be an early version of the wedge section in Wedge of Chastity. After Duchamp‘s death, these pieces were found to be connected with Etant donnés, or Given, the piece on which Duchamp worked in secret between 1946 and 1966 and which is now installed at the Philadelphia Museum of Art. Etant donnés can be seen as a three-dimensional realisation of the action alluded to in The Bride Stripped Bare by her Bachelors, Even (replica in Tate Gallery, T02011). Etant donnés consists of an elaborate erotic tableau of a female nude with legs spread, and is viewed through a peep-hole in a wooden door. The French title, Objet-Dard, is a pun on ‘objet d’art’, or work of art. The word ‘dard’, or ‘dart’, suggests masculine aggression, but the limp phallic form could as easily refer to impotence as to sexual satisfaction. Dart Object was based on a part of the mould of Etant donnés that had been situated directly under the breast of the ‘bride’, holding the ‘skin’ in place. After he had finished with the mould, Duchamp broke it, and the shape of one of the broken pieces gave Duchamp the idea of using it as a work of art. Inverting the scriptural source in which Eve is created from Adam’s rib, Duchamp creates an emphatically male symbol from a rib-like structure in a model of a female figure. The raised strip along the upper surface, painted silver, echoes the strip of lead inlaid in the original plaster. The original piece was made in 1951 (Musée National d’Art Moderne, Centre Georges Pompidou, Paris). In 1962 the Galleria Schwarz, Milan, made an edition of eight in bronze, of which this is number one. Two additional casts were made for the artist and Arturo Schwarz. (Tate)