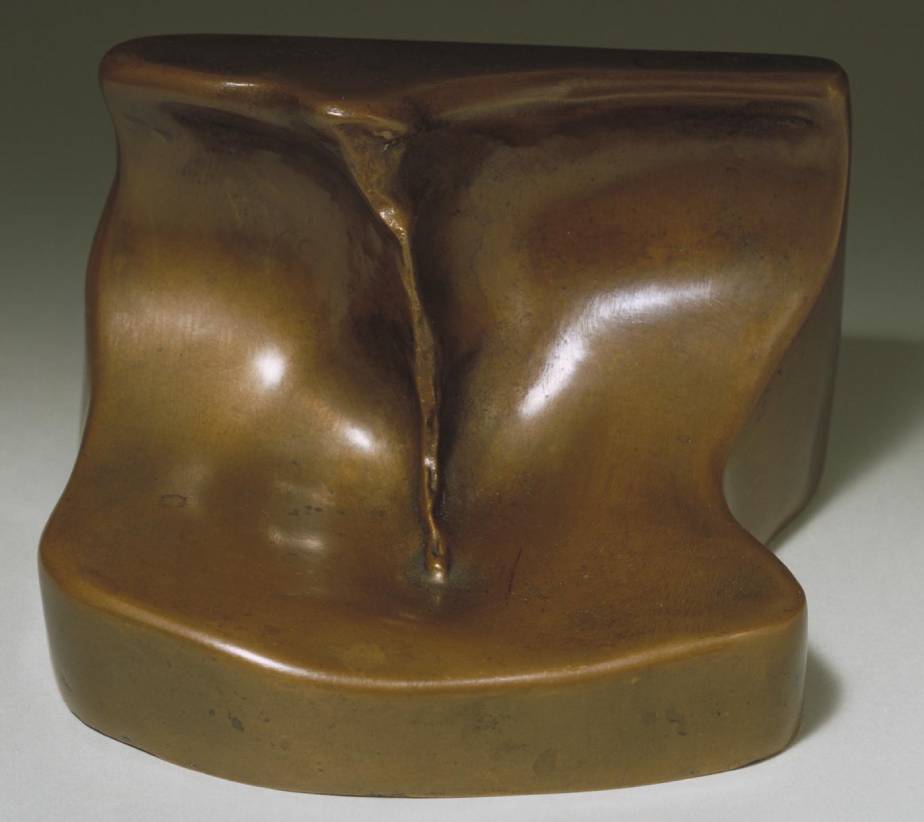 In the 1950s Duchamp created a series of four small-scale ‘erotic objects’: Not a Shoe (1950, Jedermann Collection), Female Fig Leaf (1961 bronze cast, Tate Gallery T07279), Dart Object (1962 bronze cast, Tate Gallery T07280), and Wedge of Chastity (1963 bronze and dental plastic edition, Tate Gallery T07281). Not a Shoe is thought to be an early version of the wedge section in Wedge of Chastity. After Duchamp‘s death, these pieces were found to be connected with Etant donnés, or Given, the piece on which Duchamp worked in secret between 1946 and 1966 and which is now installed at the Philadelphia Museum of Art. Etant donnés can be seen as a three-dimensional realisation of the action alluded to in The Bride Stripped Bare by her Bachelors, Even (replica in Tate Gallery, T02011). Etant donnés consists of an elaborate erotic tableau of a female nude with legs spread, and is viewed through a peep-hole in a wooden door. Female Fig Leaf is thought to be based on a mould of the exposed parts of the female figure in Etant donnés. In 1950 Duchamp made two plaster moulds of Female Fig Leaf, one of which he gave to the artist Man Ray as a gift when the latter left New York for Paris. From this mould Man Ray supervised in 1951 the making of ten examples in painted plaster. The Tate‘s version is one of ten unnumbered examples produced in bronze in 1961 by the Galerie Rive Droite, Paris. The sculpture embodies several paradoxes: what might be a cast of female genitalia is a reverse imprint; and although an ‘invasive’ mould of the bride’s sex, the piece is designated a ‘fig leaf’, a term conjuring associations of prudery and censorship. When the sculpture was reproduced on the cover of the first issue of Le Surréalisme, même in 1956, it was lit in such a way as to suggest a convex rather than a concave form. (Tate)