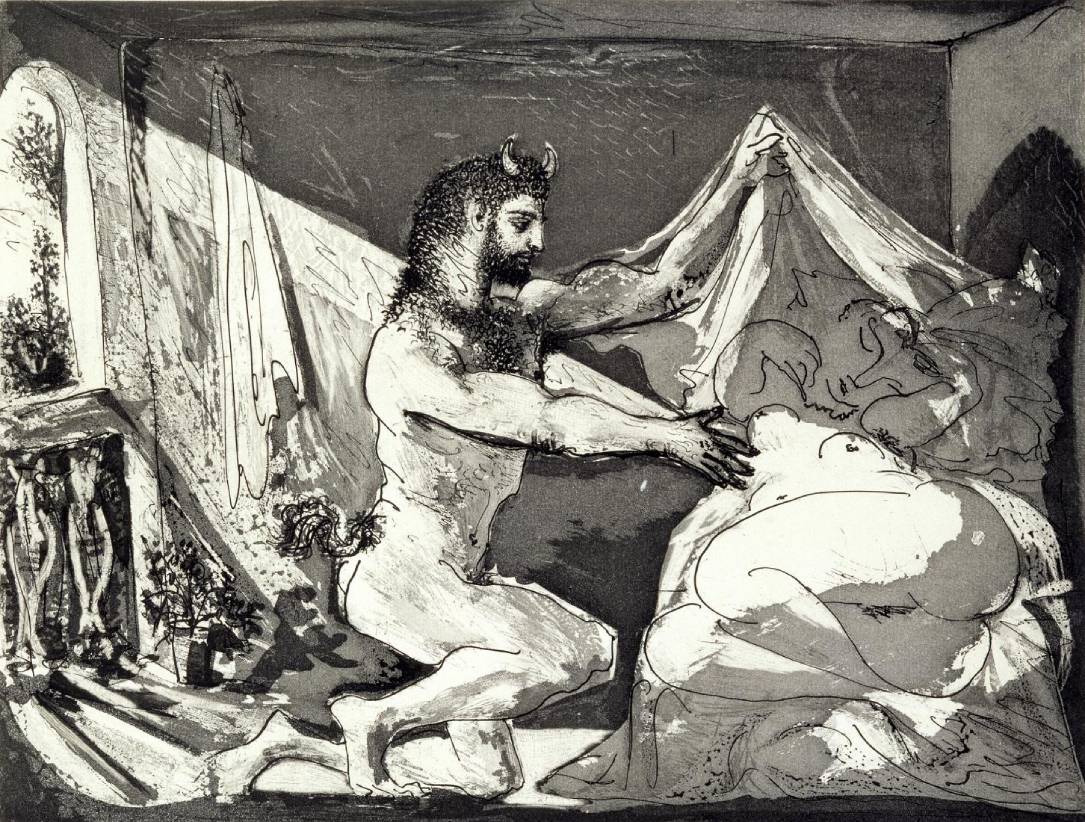 Pablo Picasso’s Faun Revealing a Sleeping Woman is the last print in the series known as the Suite Vollard. This series was the culmination of the collaboration between Picasso and Ambroise Vollard (1865-1939), who had been his first dealer and for whom he had illustrated a number of books. It consists of one hundred prints made in the period 1930-7. Of these, ninety-seven were selected by Picasso and given to Vollard in exchange for a number of his early works; the remaining three were portraits of Vollard. Picasso used a range of techniques in this series, such as etching, aquatint, drypoint, wash, burin and scraper. He depicted a variety of themes, among which the sculptor in his studio and scenes from Greek mythology, particularly relating to the Minotaur, predominate.

Made on 12 June 1936, this is the sixth and final state of Faun Revealing a Sleeping Woman. Although the image remained fundamentally the same through the six states, the simple black lines and negligible shading of the earlier states developed into rich tones of grey that depicted a night-time scene with a dramatic play of light and shade. The faun, however, underwent a major transformation, growing more striking and classical-looking with every state, and finally becoming, as Picasso cataloguer Brigitte Baer has described him, ‘a god-like personification of beauty.’ (Baer 1983, p.98.) An intriguing change is in the minor detail of the plant in a pot in front of the balcony: at first a strawberry plant, it eventually turned into basil which, according to Mediterranean folklore, had the magical power to transform animals into wonderful creatures, especially during a full moon.

This print is directly based on Rembrandt’s engraving Jupiter and Antiope, 1659. In Greek mythology, Antiope was a daughter of Nycteus, King of Thebes. Zeus (known as Jupiter in Roman mythology) was attracted by her beauty and came to her in the guise of a satyr (a half-human creature with the horns, legs and hooves of a goat, known as a faun in Roman mythology), after which she conceived twins, Amphion and Zethus. Forced to abandon her children and flee Thebes, she was later brought back to be enslaved by her evil step-mother Dirce. Upon reaching maturity her sons, who had been secretly brought up by shepherds, exacted a terrible revenge upon Nycteus and particularly Dirce, who was tied to the horns of a wild bull.

Many commentators have remarked on the influence that Picasso’s life and circumstances had on his work. Faun Revealing a Sleeping Woman was made as Picasso’s relationship with his lover and muse of ten years Marie-Thérèse Walter was petering out, affection for her having replaced passion. Here the faun – who may be a cipher for Picasso – gently uncovers the sleeping Antiope – who may represent Marie-Thérèse – without disturbing her. This print has been described as ‘a work that looks back nostalgically on their stay in Juan-les-Pins [in April 1936] and on a passion that had changed … the most successful print in the Suite Vollard and one of the most beautiful in the artist’s engraved work.’ (Baer 1983, p.98.) (Tate) 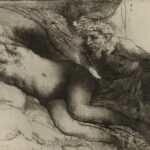