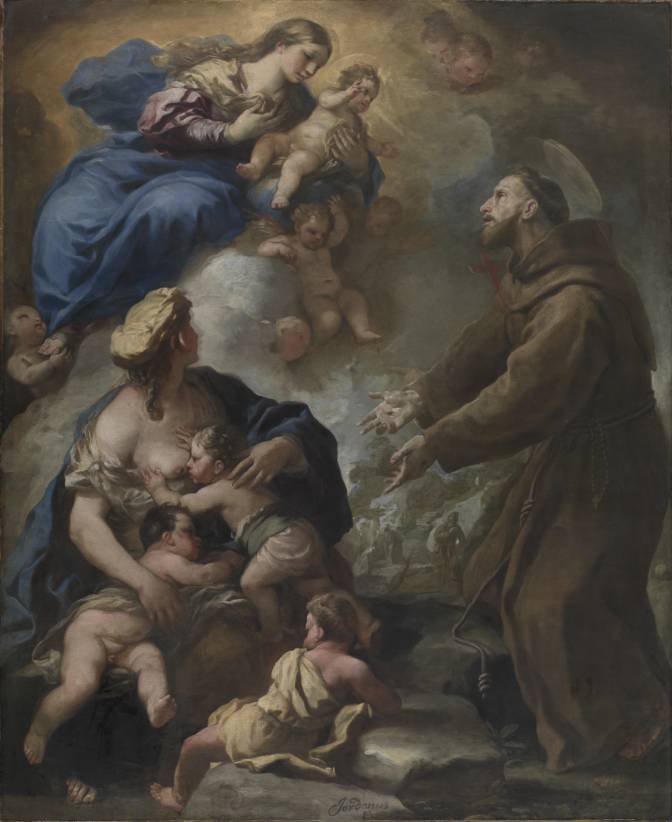 This work represents the High Baroque tradition of illustrating the visions and ecstasies of holy figures. St. Francis stands to the right of the apparition of the Virgin and Child, while motioning to a mother with three young infants, a symbolic representation of Charity. A popular Italian saint, St. Francis of Assisi (1181?- 1226) was famed for his many holy visions and was reported to have received the stigmata, bodily punctures that echoed the crucifixion wounds of Christ. Close observation of the painting reveals that Giordano originally painted St. Francis motioning his hands towards the Virgin and Child, perhaps reaching for the Infant Christ. In the final version, however, St. Francis gestures to the figure of Charity, as a witness to the saint’s spiritual vision. The saint thus serves as the intermediary for humankind, appealing to the Virgin and Child for the sake of Charity. St. Francis, the founder of the Franciscan order of monastics, dedicated his life to assisting the poor and remains one of the most popular Catholic saints. (CMA)