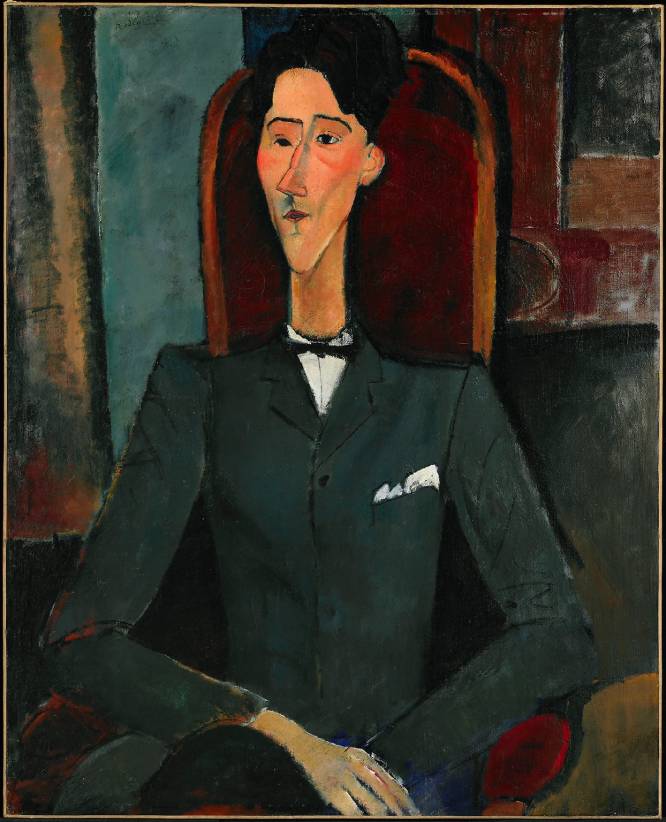 Modigliani moved from his native Italy to Paris in 1906 and soon became part of the city’s vibrant artistic and literary culture. His portraits often portray friends and acquaintances, such as the poet, playwright, and filmmaker Jean Cocteau. Cocteau’s elongated head, neck, and nose, as well as his simplified features, recall the artist’s sculptural work, which was informed by his study of the so-called “primitive” forms of non-Western sculpture, especially African masks; the color tonalities, drawing style, and overall composition of the portrait reflect the strong influence of Paul Cézanne. In the spring of 1916, Pablo Picasso brought the poet Jean Cocteau to meet the artists and poets who habitually gathered at Moïse Kisling’s Montparnasse studio. The Right Bank poet apparently irritated the group of Left Bank friends with his pretentions: the poet Pierre Reverdy recounted later that Cocteau talked incessantly, his voice like the rain beating on the roof, while everyone ignored him. Both Modigliani and Kisling painted Cocteau, and Modigliani’s devastating portrait captures the poet’s vanity. Cocteau paid for the portrait by Modigliani, but, claiming that it would not fit in a taxi, left it behind and never sent for it. At this time in his life, Cocteau was proud of his long, straight nose, which is shown here with a bump, so his pride may have been wounded. Cocteau later wrote, “It does not look like me, but it does look like Modigliani, which is better.” (PUAM)