In the course of his life, EI Greco painted numerous versions of the Annunciation, thus allowing his stylistic development to be traced through his changing treatment of this Biblical episode. This painting, dated around 1576, is thought to be one of the last versions executed in Italy, and is clearly influenced by the Venetian style. From her prayer-stool at the left of the painting, the Virgin listens attentively to the message of the Archangel, a figure rendered very much in the style of Veronese. The light and the colouring owe much to Titian, a painter EI Greco admired, while the arrangement of the figures and the treatment of the drapery strongly recall the work of Tintoretto. Here, EI Greco places the figures within a simple architectural setting, loosely framing them to make the scene more realistic. (EA)

EI Greco depicted the subject of the Annunciation on various occasions throughout his career. Along with his depictions of The Adoration of the Shepherds, Saint Paul, and the mystic Saint Francis, his various versions of the Annunciation allow us to reconstruct his style and artistic evolution through a single subject. In the case of this subject, a comparison with Annunciations from his Italian and Spanish years reveals the transformation of his style over the years. Various paintings on this subject are recorded in the inventories drawn up on the artist’s death in 1614 and on the occasion of his son Jorge Manuel’s marriage in 1621.

The present canvas was acquired by Baron Hans Heinrich Thyssen-Bornemisza in 1975. The painting was in the Corsini collection in Florence then entered the collection of Luigi Grassi in the same city. In 1927 it was in London, then with two commercial galleries: Trotti & Cie. in Paris and Knoedler in New York. From the US it passed once again to Florence to the collection of Alessandro Contini-Bonacossi, then entered the Villa Favorita via Stanley Moss. While in the Contini-Bonacossi collection it was first exhibited to the public in an exhibition held in Rome in 1930.

The canvas, which has been dated to around 1576, falls within the artist’s Italian period and is considered to be one of the last versions of this subject painted by EI Greco before his departure for Spain. The model, as Álvarez Lopera indicated, derives from the small Annunciation to be seen on one of the wings of the Modena Triptych rather than from the versions in the Museo del Prado and the Muñoz collection. Comparing the scene in the Modena Triptych and the present canvas, there are evident similarities such as the Virgin’s pose and physical type, the form of the reading desk, the Archangel’s clothing and the placement of Mary’s arm and left leg. In the versions of this subject in the Prado and the Muñoz collection, the Virgin’s body is almost upright as she turns her head to the archangel, while her left leg is closer to the desk. In contrast, the pose of the Virgin in the Modena Triptych and in this canvas create a diagonal from the line of the body and the leg, with the form of the knee visible under the drapery.

The present canvas was studied by Venturi who first brought it to the attention of a wider scholarly public. Wethey considered it to be one of the artist’s “most pleasing” early works. In the construction of the composition EI Greco looked to a series of specific elements and details derived from Italian art, which he harmonised and translated into his own unmistakable style. The present Annunciation is based on works of the same subject by Titian and Tintoretto, although the positions of the two figures are reversed in EI Greco’s versions. More specific comparisons are to be found to Tintoretto’s composition in the Scuola di San Rocco in Venice, which EI Greco used as his starting-point for the figures, also looking to Tintoretto’s approach to drapery in a more general way. The elegant, refined figure of the Archangel in this canvas is taken from Veronese while the light and colouring look to Titian, whom EI Greco particularly admired, considering him the great master of colour.

The present Annunciation marks a step forward in EI Greco’s mastery of the modes of western art. Although he did not use complex architectural settings at this date, the checkerboard tile floor, pink curtain, rear balustrade and coherent placement of the figures are all used to create a sense of veracity. The artist has clearly evolved and progressed in relation to the Annunciation scenes on the Modena Triptych and the version in the Museo del Prado. Here he makes every effort to distinguish the different natures of the figures: the earthly Virgin and the celestial Archangel, while the cloud of glory above them is more developed than in earlier versions. The bold foreshortening of some of the angels among the clouds heralds the later style of EI Greco’s Spanish works. 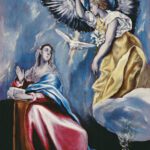