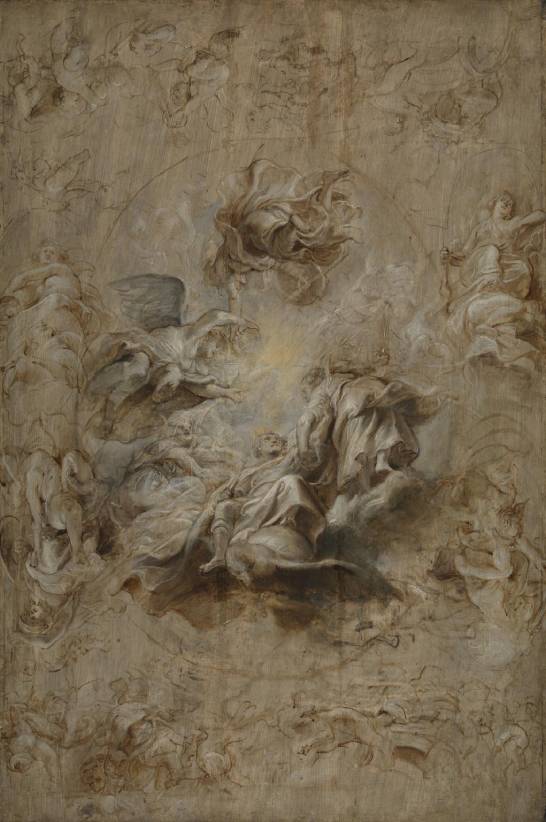 The Apotheosis of James I and Other Studies: Multiple Sketch for the Banqueting House Ceiling, Whitehall
c.1628–1630
Oil on oak, 94.7 x 63 cm
Tate Britain, London

Rubens was the leading artist in Antwerp, and one of the most renowned painters in Europe. After eight years in Italy, he had returned to Antwerp in 1608 and set up an extremely productive studio where he was assisted by many young and talented artists.

Rubens was first approached by the British court in 1621 about producing paintings for the ceiling of the newly rebuilt Banqueting House, which was part of Whitehall Palace in London. Designed along Palladian lines by Inigo Jones, this was an extremely prestigious space, in which foreign ambassadors were formally received and court masques performed. The project stalled for various reasons, and James I died in 1625. During the late 1620s two written programmes for the subject matter of the ceiling were devised in London. In both, it was proposed that the central oval should celebrate the Union of the Crowns of Scotland and England, which was considered to be James I‘s principal achievement.

In 1629, Rubens arrived at the court of James‘s son, Charles I, as a diplomatic envoy of Philip IV of Spain. Rubens‘s negotiations towards peace were successful, and during the visit it also seems finally to have been agreed that he should execute the Banqueting House ceiling, which was to be a celebration of Charles’s late father’s achievements. Before Rubens left England in March 1630, he was knighted by Charles I.

This sketch was evidently made by Rubens for his own personal reference, and presumably while he was in London. Executed in near-grisaille on panel, it seems to be his first visualisation of the overall ceiling. It comprises his most preliminary ideas for the designs for seven of the nine compartments in the ceiling. In the centre, instead of the union of Scotland and England, Rubens depicts the apotheosis of the late king James, seen being carried up by Jove’s eagle, assisted by the figure of Justice, with Minerva (Wisdom) overhead. To either side, four ovals contain positive personifications of James‘s royal qualities: Liberality triumphs over Avarice, and Discipline over Wantonness; below, upside down, Knowledge (Minerva again) triumphs over Ignorance and Heroic Virtue (Hercules) over Envy. Across the top (again, upside down) and bottom, putti, animals and swags of produce symbolise the benefits of national unity and peace.

Freely sketched, in a number of stages, this design is wholly in Rubens‘s hand and demonstrates his remarkable fluidity and freedom of invention. Subsequently, Rubens was to produce a number of small detailed modelli (around 13 of which survive) for individual elements of the complex allegorical ceiling design. These were for his assistants to follow, as they worked on the final canvases in his studio in Antwerp. The canvases were completed by August 1634, despatched to London in 1635, and installed in the ceiling in 1636. They remain there in the Banqueting House (now Historic Royal Palaces) to this day, the only such ceiling by Rubens to survive in situ. (Tate)