This minutely detailed painting depicts the young Jesus stretching after his day’s labor in his father’s carpentry shop. His mother, kneeling behind him, looks up at the shadow her son casts on the rear wall, which seems to prefigure his crucifixion. Like other members of the Pre-Raphaelite Brotherhood, the art movement he helped found, William Holman Hunt was committed to direct observation of nature, and he sought to illustrate biblical subjects with archaeological exactitude. This work is the third and final version of a composition the artist began in Palestine and Jerusalem in 1869, where he could study the setting from life. It was commissioned by the London dealers Thomas Agnew & Sons as the model for a print. The Art Institute’s collection also includes an early proof of that print. The painting teems with symbolism. For example, the star-shaped aperture above the window recalls the light that guided the Magi to the newborn Jesus, while wood shavings and carpentry tools anticipate the instruments of his death, nails and a wooden cross. The bright red headdress in the lower-right corner foreshadows the crown of thorns he was forced to wear before his execution. (AIC) 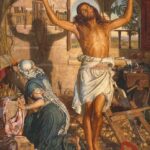