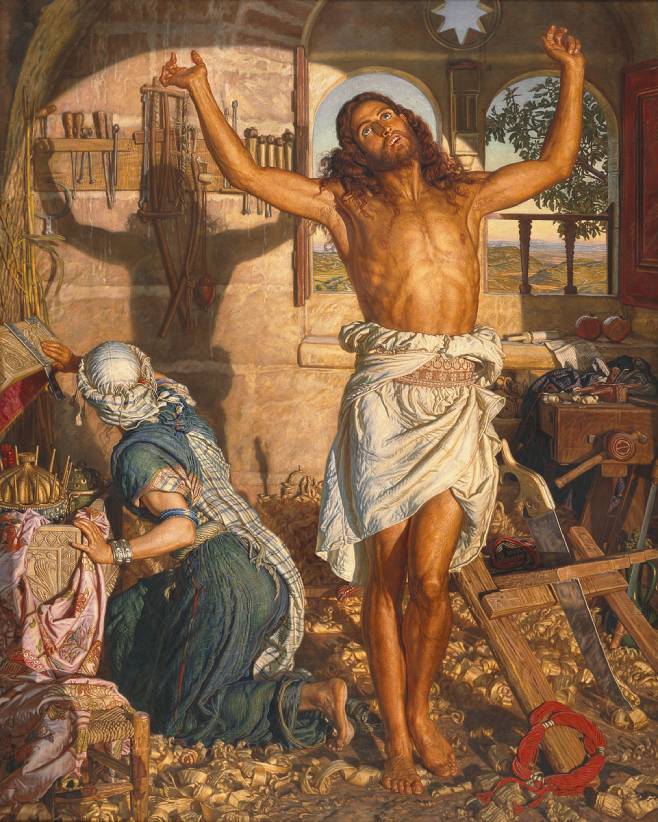 The picture shows a carpenter’s workshop. A youthful Christ, depicted as muscular and tanned, stands facing the front and stretching, with eyes gazing towards the sky. He is stripped to the waist with a white garment tied round his waist. The scene is bathed in the light of a late afternoon sun. Mary is to his left. She kneels on the floor of the workshop, She is opening a large chest filled with the gifts of the Magi, her head turned towards the back wall where the shadow of Christ is cast as a premonition of the Crucifixion. An array of tools in a wooden bracket mounted on the wall refer to the shape of the Cross. The workshop is filled with carpentry tools and other objects, most of which carry some symbolic significance or or allude to a more complex narrative. A pair of arched windows behind the figure of Christ reveal an extensive landscape, with a fig tree appearing through the right window (an allusion to St Luke, 22:29-31); above the windows and located between them in the upper right corner of the composition is a star-shaped aperture, a reference to the star that led the wise men to the Nativity. (MCAG)