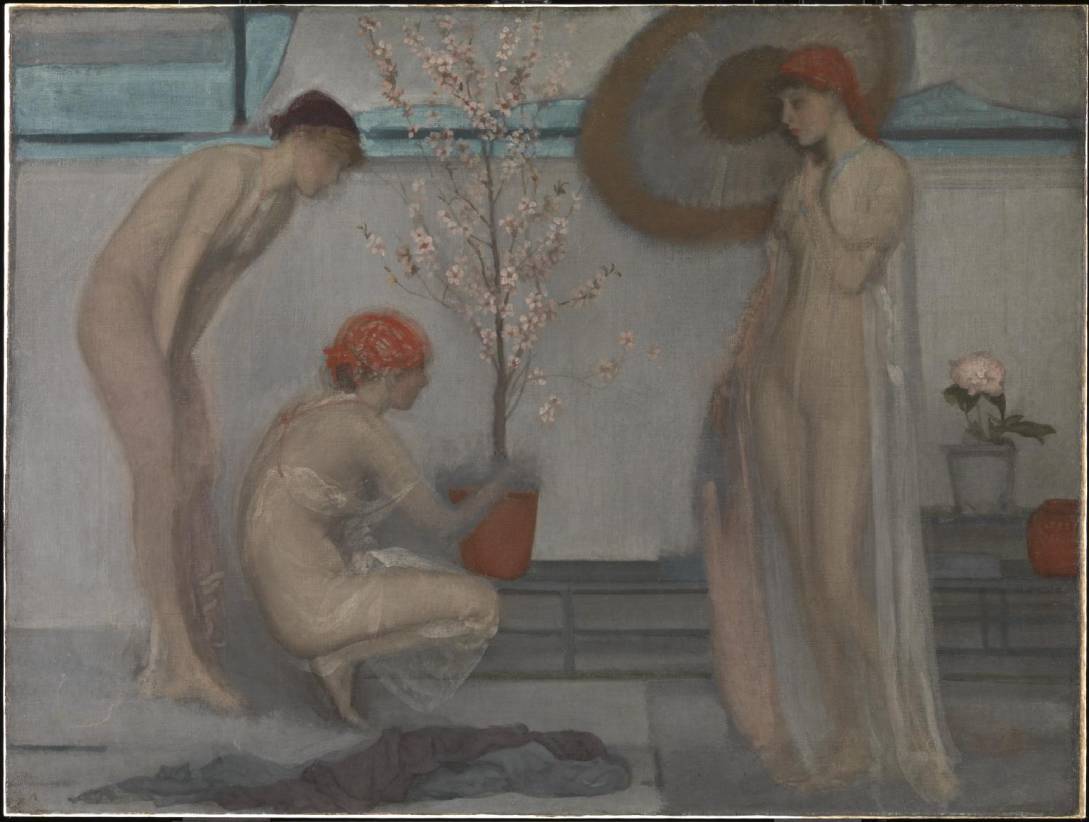 This picture derives from one of six oil sketches that Whistler produced in 1868 as part of a plan for a frieze, commissioned by the businessman F.R. Leyland (1831-92), founder of the Leyland shipping line. Known as the ‘Six Projects’, the sketches (now in the Freer Art Gallery, Washington) were all scenes with women and flowers, and all six were strongly influenced by his admiration for Japanese art. Another precedent for these works was The Story of St George, a frieze that Edward Burne-Jones (1833-98) executed for the artist and illustrator Myles Birket Foster (1825-99) in 1865-7. The series of large pictures was destined for Leyland’s house at Prince’s Gate, but never produced, and only one – The White Symphony: Three Girls (1867) was finished, but was later lost. Whistler embarked on a new version, Three Figures: Pink and Grey, but was never satisfied with this later painting, and described it as, ‘a picture in no way representative, and in its actual condition absolutely worthless’ (quoted in Wilton and Upstone, p.117). He followed the original sketch closely, but made a number of pentimenti which suggest that the picture is not simply a copy of the lost work. In spite of Whistler‘s dissatisfaction, it has some brilliant touches and a startlingly original composition.

Although the three figures are clearly engaged in tending a flowering cherry tree, Whistler‘s aim in this picture is to create a mood or atmosphere, rather than to suggest any kind of theme. Parallels have been drawn with the work of Albert Moore, whose work of this period is equally devoid of narrative meaning. The design is economical and the picture space is partitioned like a Japanese interior. The shallow, frieze-like arrangement, the blossoming plant and the right-hand figure’s parasol are also signs of deliberate Japonisme. Whistler has suppressed some of the details in the oil sketch, effectively disrobing the young girls by depicting them in diaphanous robes. The painting is characterised by pastel shades, a ‘harmony’ of pink and grey, punctuated by the brighter reds of the flower pot and the girls’ bandannas, and the turquoise wall behind. It has been suggested that Whistler derived his colour schemes, and even the figures themselves, in their rhythmically flowing drapery, from polychrome Tanagra figures in the British Museum, which was opposite his studio in Great Russell Street. (Tate) 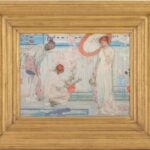